The site is located on the crossroads of the Gentsesteenweg and the Harelbeeksestraat, the so-called Gentsepoort, where the historic road ‘Ghent – Kortrijk’ connects with the Kortrijk small ring road.

Part of the buildings on site was already demolished in the nineties in order to insert a roundabout. This caused the current undulating perimeter and construction line. The site is completely locked in by the two adjacent plots. Between the adjacent buildings, the plot boundaries are made from garden walls 4m. (or just over 13 feet high) high.

Emphasis was put on ecology, green and energy efficiency ….elements, which often lack in the current urban social housing plans. The ambition of Goekope Woning went further than that. The client had high sustainability requests and a limited budget as a couple of extreme preconditions and expected the design team to come up with original architecture and high living quality.

The undulating perimeter, which is at the same time the obligatory building line, was included in the architectural concept, because it is the border between private and public property. This street façade is also the sun side of the plot causing the living rooms and the accompanying private outside spaces of the apartments to be located at the street side. By drawing the street facade tightly back and providing a semi-transparent second facade – a curtain wall – which follows the building line, an intermediate space will be created on the floors, 2 to 4 m. wide (over 6 feet to just over 13 feet), which is at the same time ‘inside’ and ‘outside’.

This building concept creates outside rooms which generate some privacy in relation with the neighbours and passers-by on the street and by using a screen with manually operated blinds, it still allows plenty of light and light penetration to organise the living rooms deeper in the building to a high level of quality. The curtain wall can be covered with vines, which will help to establish the green look of the building. On the ground floor multi-functional spaces are planned as shops or offices behind the undulating glass façade. Together with the open entrance to the parking lot and internal space, this will cause the building to showcase itself along the street as transparent and inviting, and it will guide to the entrances of the living units at the back, via stairs, lift or arcade. 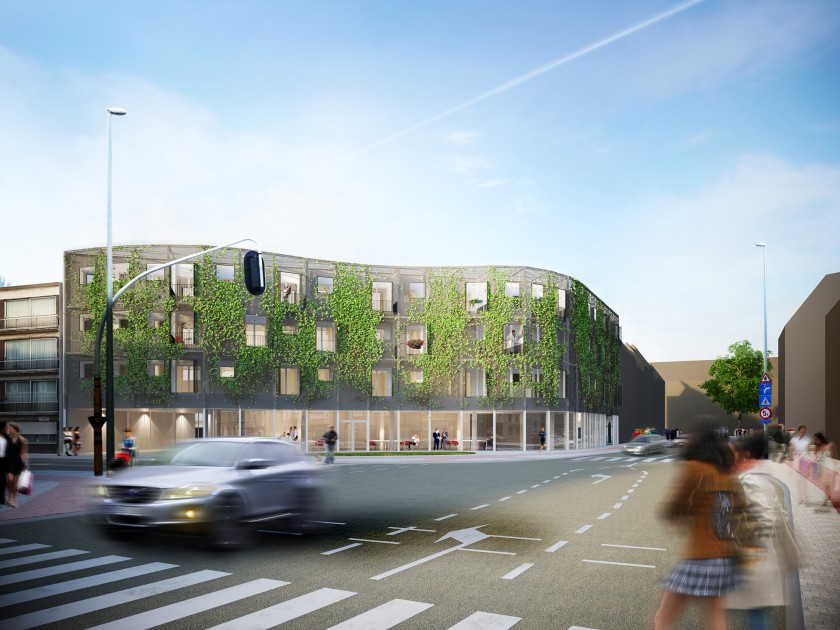