The site is located on the corner of the building block surrounded by the Bargiekaai and the Guldenvliesstraat in Ghent.
The biggest asset this site has, is the stream at its south-west side, which reinforces the feeling of open space and perfectly meets the current trend of ‘living with a water view’. At the moment, the plot extends to the quay side, but because of the new building line, the front façade will be aligned with the existing buildings.

The apartments are organised in such a way that the majority of them enjoys a view on the water. In order to protect the inhabitants’ privacy and simultaneously avoid overheating on the large windows at the sun side, large internal terraces are planned. The car park will have an entrance in the Guldenvlieslaan and is planned to be semi-underground, giving the ground floor apartments with a garden on the street side a ‘bel étage’ status.

That part of the plot located outside the building line offers a unique opportunity to create a green buffer zone between the apartments and the Bargiekaai. It is more than likely that the city of Ghent will choose in a later phase to widen the street, nullifying this possibility. The internal area at the north-east side of the building has been developed as a private garden area and that is where the gardens and terraces are located assigned to the apartments on the raised ground floor.
Sustainability reasons make us choose for green roofs on top. At the head of the building block there are two roof terraces for the two corner apartments underneath.

In the framework of sustainable and adaptable building, this building is fully accessible even from the semi-underground car park with bike shed and meter rooms. An ingenious and flexible plan also ensures that the apartments become 100% wheel chair accessible with only a few bits of work needing to be done, should the inhabitant so require.

The buildings comply with the principles laid down in the ‘Charter van Aanpasbaar Bouwen’ of the City of Ghent (the adaptable housing charter), which aims to be able to offer new build apartments to the elderly, where they can live as long as possible, even in case of any disability. The design pays extra attention to the terraces. Each internal terrace has at least a 10m2 surface, located centrally on the street side and accessible from the kitchen, the living room or bedroom/office. The inhabitants can manually control the influx of sunlight by using the sliding blinds. 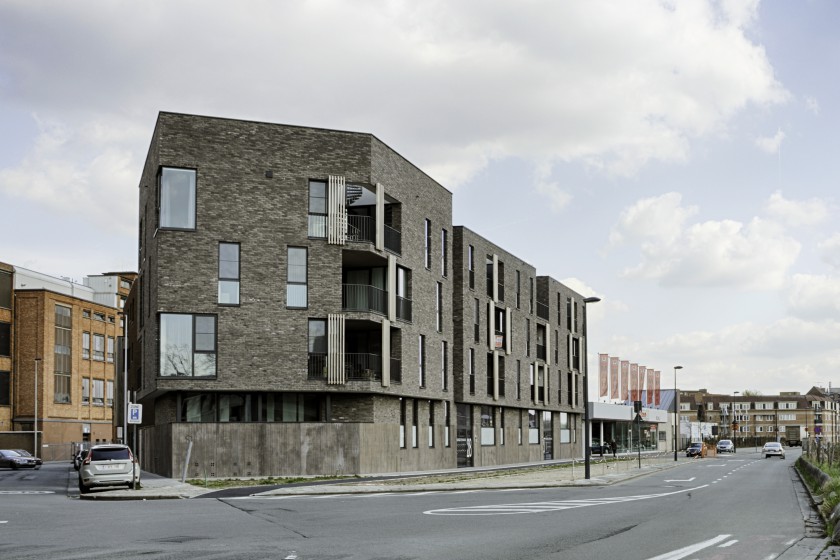