The KaHo Sint-Lieven technology campus is located just outside Ghent’s former city walls, within the typical 19th century working men’s neighbourhood  ‘Rabot’. Typical characteristics of the neighbourhood are that it is very densely built up with very old buildings with only a few bits of green in between. The campus itself consists mostly industrial buildings, converted into class- and practice rooms, office space and meeting rooms. The new school is built on that part of the old car park, after the demolishing of the old factories. The intention by the City of Gent was to turn the Bargiekaai and Elyseese Velden (behind the campus) into traffic free zones, thereby creating a greener and more enjoyable living environment. The former Waldam was located along the campus’ south side. This stream ran parallel with the Begijnhof and connected the Lieve and the Coupure. Now the City of Gent aims to connect the Griendeplein and the Bargiekaai with a walkway.

In order to safeguard as much open space as possible, we chose a very compact building with four construction layers. This minimal occupation of the surface by the building leaves enough spare room for any extensions at a later date, but also for plenty of green and open space. The detached building is situated back from the street. The shape and texture give the building an autonomous character, enabling it to fit in a chain of detached buildings like the Courts of Law, the GMH apartment blocks, the remains of the textile factory etc. which are all lining the external edge of the former city walls.

Entrances to campus are located along both the Bargiekaai and the Griendeplein. The first entrance consists of fencing which can be locked between the new building and the existing one along the Gebroeders De Smetstraat. It gives access to a car park for ca. 220 cars, located behind and underneath the building. The second entrance ‘Griendeplein’ consists of an eight meter wide ‘internal street’, crossing the whole of the building and reserved for pedestrians and cyclists. This street gives first of all access to a central internal square, which in its turn gives access to all the university buildings.

The project consists of classrooms and labs, administration space, toilets, technical rooms and circulation routes. They have all been clustered depending on department and spread out over the four layers.
The compact ‘mono-volume’ is cut in two by an ‘internal street’ which leads to a central patio. By treating the external walls all in the same way with rough solid material (galvanised steel grilles) and by giving the internal walls which face the internal street a contrasting treatment (veneer sheeting), the twofold volume gives the impression of being one building. The wide diversity of required rooms (office space, class rooms, labs of single and double height) results in an equally as wide diversity of window heights, technical supplies etc.
The transparent grilles which have been fitted with holes in a controlled and frugal way, cover a second wall which has excisions administered more loosely, according to the requirements of the underlying function. This enables this solid structure to be adjusted or even re-organised in the long run or even completely converted depending on new (light) requirements. 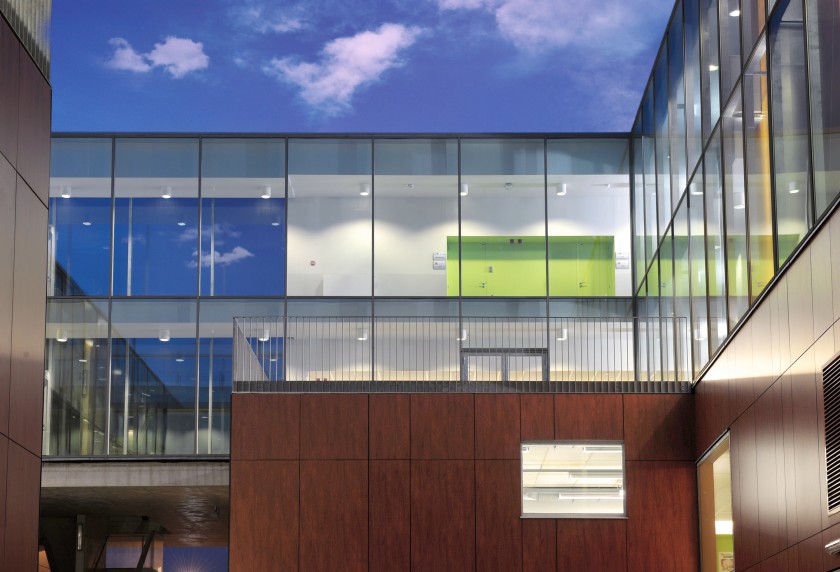 Discover these Education and research Projects